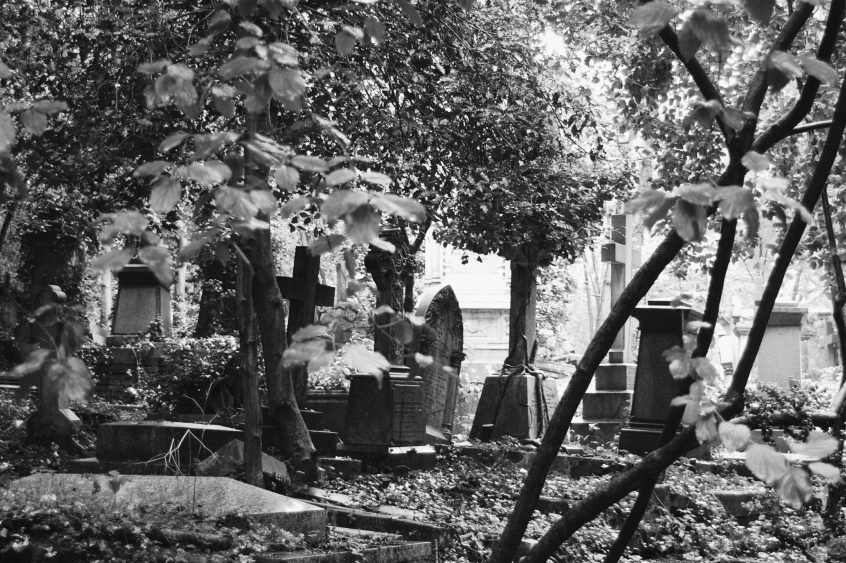 In chapter one of The Third Sun, Fia is gazing at the stars above Hampstead Heath, before following a trail of white feathers into the cemetery and falling from Earth into Ohinyan.

All of the photos on this site were taken by my husband, Ali, during our tour of Highgate Cemetery. The west part of the cemetery is accessible by guided tour only, details of how to join a tour can be found here.

Highgate Cemetery opened in 1839 in response to London’s burial crisis. The mortality rate was so high that graves were being crammed in wherever there was space – including in between shops and houses.

This created not only an awful smell, but an already unhealthy environment to be full of disease and bacteria at every corner.

In response to this crisis, Parliament passed a bill in 1832 for several private cemeteries to be built on what was then the outskirts of London. These Victorian cemeteries became known as the Magnificent Seven:

Highgate Cemetery is hauntingly beautiful. There’s an abundance of detail on the crumbling and decaying graves, and the Egyptian influences throughout are fascinating.

If you’d like to retrace Fia’s steps from Parliament Hill in Hampstead Heath (beginning at the viewpoint marked on Google maps), the walk to the cemetery takes around 20 minutes, and the guided tour of the west cemetery is highly recommended – this is where you’ll find the above ground catacombs that Fia runs into, falling from Earth to Ohinyan.