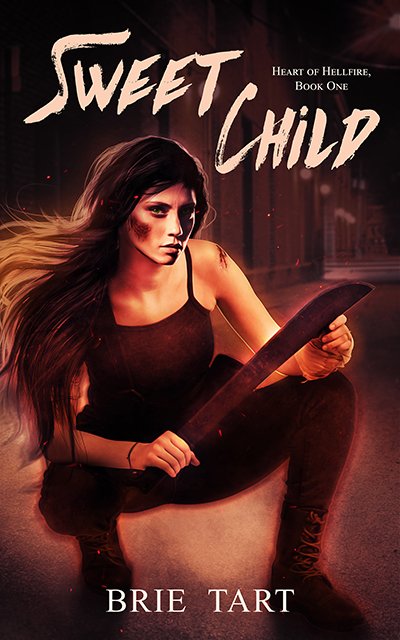 There are so many incredible authors out there, I think it’s high time we started to meet some of them, don’t you? For this series of author interviews I’ll be starting out with sci-fi and fantasy authors, because fantasy is what I love to read and write!!

Let’s kick off with our first interview, and welcome author Brie Tart.

Hi! I’m Brie Tart, lover of all things fantasy (fae, folklore, and fairy tales are my current favorites). My weaknesses include desserts, breads, fluffy animals, and fandom ranting. I know two and a half languages (almost conversational in the third one). Nice to meet you!

In which genre/sub genre do you write?

Fantasy will forever be my first love, but right now I lean toward modern humanity colliding with ancient folklore (so a mix of urban fantasy, contemporary fantasy, and portal fantasy).

How many published books/stories do you have?

Five, going on six later this year. Right now I’m working on my Heart of Hellfire series (buff biker mama turns fae hunter to protect her family) which has three of those (book 1 and 2 are out, 3 is on pre-order). Two are in my ongoing Exiles of Eire series (modern girl and fae prince–both with family issues–work together against a royal conspiracy).

The sixth? Published a long time ago under a secret pen name. I’ll never tell.

What do you do when you’re not writing?

I love studying languages! I’m actually an interpreter as well and want to get into translation.

Heart of Hellfire’s series was inspired by a very addictive text-based role playing game I used to play as a teen (think Dungeons and Dragons on a World of Warcraft server, but with paragraphs so literally EVERYTHING but the setting is up to your imagination). I created a couple characters and they had very dramatic adventures. While they evolved to be very different as I matured, a lot of their base story parts stuck with me, and they became Helen and Lucy from Sweet Child.

As a child, what did you want to be when you grew up?

Originally? A visual artist, specifically an animator because I love the 90s era Disney cartoons so much. I still draw, and have made or edited a few indie comics.

Do you believe in writer’s block? What do you do when it strikes?

I think the phenomenon of “writer’s block” is a very preventable combination of factors that plugs up a person’s creativity. For me? It usually indicates that either something is wrong with the story and my subconscious is processing through how to fix it, I’m bored with the story because the shiny new idea syndrome has worn off it, outside situations are stressing me out and/or distracting me, OR I’m feeling lazy and want to think about the story instead of actually telling it. My best solution is what Stephen King suggests in his book “On Writing.” To paraphrase: put in the work every day and train the muse to show up when you need it. A close second is making a rough plan of what I want to do/accomplish with the scene or chapter or section to get the juices flowing and give myself a direction.

That’s a little easier for me since I like to work with modern day and/or mythological characters/settings. For epic fantasy, I like to do like Tolkien. He drew from medieval culture, Anglo-Saxon myths, the Welsh language, and all kinds of other sources to make what became Middle Earth. I like working this way because it makes the story come out feeling more rooted and real.

How many unfinished manuscripts/stories do you have?

We don’t want to open that drawer…tens at least.

What’s the most surprising thing you’ve learned about yourself through writing?

My sense of style at any given time always reflects my characters. I got a perm once because my main character at the time had curly hair. I even started strength training consistently because I’d been writing Helen from the Heart of Hellfire series for a few months straight and wanted my body to look more like hers.

If you could go back in time and give yourself some encouragement or advice for writing, what would it be?

I’d tell myself to always finish what I start without jumping to something new in the middle, and to start publishing my work waaay sooner.

In Sweet Child, Helen has a hard time connecting with her daughter and has to learn how to be a mom. Her partner takes care of most of the childcare because her job takes her away from home a lot, and being a parent doesn’t come naturally to her. She also loves motorcycles, MMA fighting and classic rock.

And finally, tell us about your most recent book/short story and where we can find it.

I’m working on book 3 of the Heart of Hellfire series, Mama Kin. Book 1 is called Sweet Child, where Helen Carver has to dig into a fae underworld to investigate her uncle’s disappearance and the strange new powers she has, before the mysterious people responsible for both strike out at her family.

You can find the whole series so far for sale on Amazon. It’s in Kindle Unlimited for a limited time. All of the books will start going into other stores like Kobo and Apple Books starting this summer once their time in KU has run out.

When secrets kill, she gets even.

A murdered mom, a weird ritual, and her childhood apartment up in blazes—that night still haunts Helen Carver. She always watched her uncle, safe on the sidelines, as he chased empty leads trying to figure out what happened. Now grown with a daughter of her own, she’s tired of watching and ready to help…right as he goes missing.

As she retraces his steps, Helen finds a strange hidden society. Its glowing beings attack her with impossible speed, magic spells, and archaic weapons. Everybody has secrets. Anyone could be a threat. But one thing becomes crystal clear: The mystery around her mother’s murder now threatens her kid.

Woah! Thanks so much, Brie, for kicking this whole thing off with a bang! I’m a huge fan of the Heart of Hellfire series, Helen is such a kick-ass MC – I’d describe her as Buffy meets Jessica Jones. I’m so excited to get my hands on book three and to find out what will happen to Helen and her friends. Thank you for being my first interview!

Don’t forget to check out Brie’s website and the Heart of Hellfire series info.