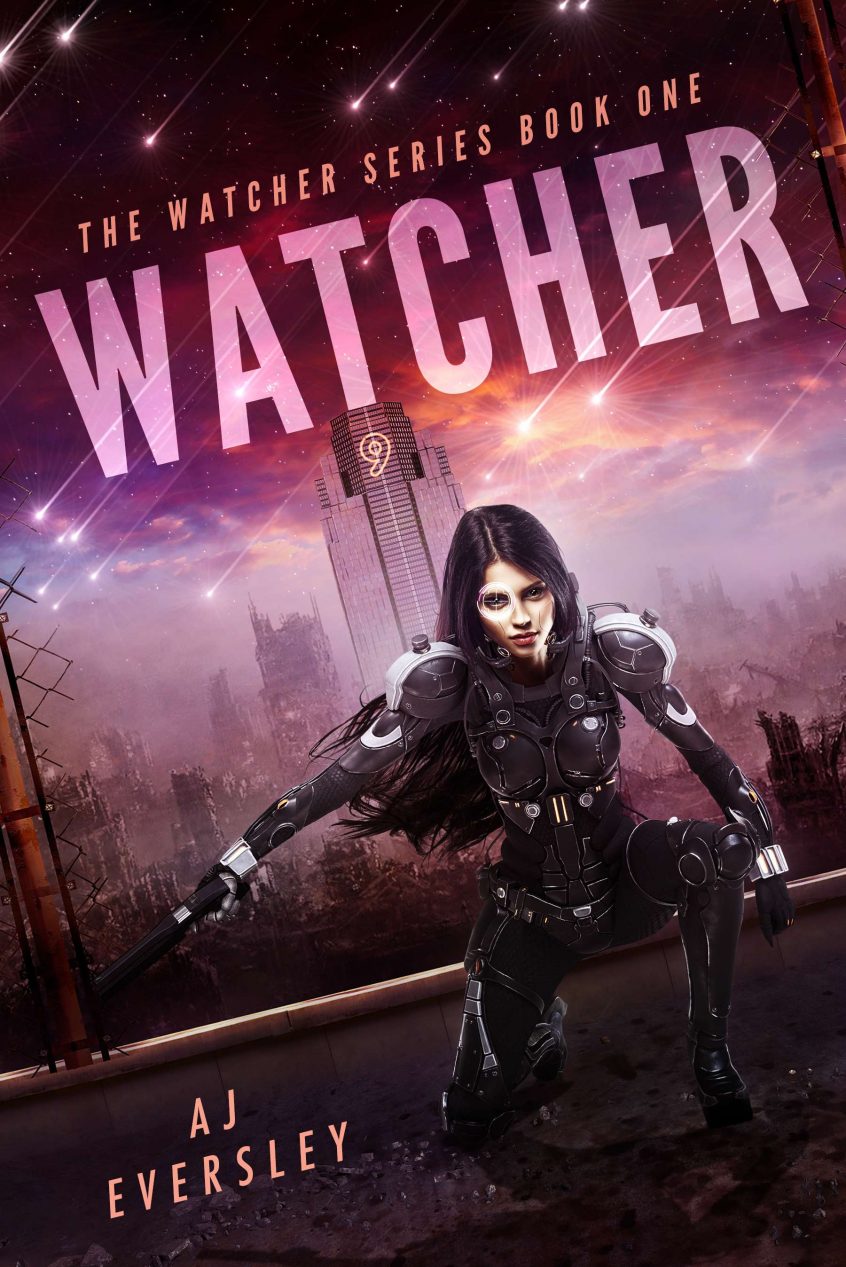 As an avid reader from a young age, it only made sense that one day I would write my own stories. I grew up in a small town in central Alberta, Canada where there wasn’t much to do but read, cheer on the Oilers, and endure the long cold winter months with copious amounts of hot chocolate and tea. I spend my days with my loyal dog, and co-author, Moto, and my amazingly supportive husband. Every day I get to do what I love, and I couldn’t have asked for a better team to help me along the way.

In which genre/sub-genre do you write?

I write YA in both SciFi and Fantasy. My [latest series] is called Watcher and it is a YA SciFi Dystopian trilogy.

I am currently working on a YA Fantasy series that will encompass a number of ‘sub-series’ (picture the Avengers, with their separate movies like Ironman and Captain America…there is some cross over and they all work towards the same final bad guy when they team up in Endgame. That is the style of world I am building, but in YA Fantasy with Fae).

The original idea came from the combination of a book prompt and my husband. He loves stories about twins and said my next book should include twin brothers. Then I read a book prompt that said “write a story about someone banished from their lands” and that sparked the idea for The Banished Prince.

It’s about two brothers, one who was banished for an unspeakable crime, while the other is set to become king. They are tied together by a dark prophecy foretold at birth that said one brother would bring darkness and destruction to his family and kingdom, and the only way to stop him would be death—however in this world, for a Royal High Fae, they can only be killed by someone of their own blood. So one brother is destined to kill the other, or their kingdom will fall.

Do you listen to music whilst writing? What’s on your playlist?

While writing I listen to a playlist on google play music called Epic Film Scores (something similar can be found on spotify as well). It’s instrumental only, so no words to distract me, and brings  about an epic feeling with everything I write! I do also have playlists/songs I listen to as inspiration. Right now there is a lot of Billie Eilish, Ruelle and Halsey.

What’s the most emotional book you’ve ever read?

I’ve read a lot recently that I’ve cried while reading…but I bawled at the end of the Throne of Glass series, throughout the final book Kingdom of Ash. However, I will say that I am a crier, and even cry writing my own sad scenes, so it’s not like it’s hard for me to tear up!

Do you have author friends, and have they had an impact on your writing/writing career?

YES! Obviously you (Victoria) are one of my author friends, but I have a few others I’ve connected with through social media. The biggest impact I would say is the support system. As a writer, its easy to feel alone or that people around you who aren’t writers don’t understand, so it’s necessary to have someone in your life you can talk to about writing, life, stresses…etc, and know that they get it!

I had to write the death of an animal and it was terrible! It was necessary for a lot of reasons, but that same week we had to put down our puppy of only 2 years as he had severe epilepsy and it had gotten worse to the point that his quality of life was terrible. It gutted me to then write this scene, which I knew was coming but didn’t think the timing would line up like that, but it also allowed me to grieve with the characters and celebrate my puppy through the pages I wrote. So while it was a very hard scene, it was kind of therapeutic as well! (RIP Thor)

I LOVE Pinterest. I have so many boards with inspiration on names and locations that I tend to go there first for ideas. I try to have a general idea (such as the culture or background of the story) which help shape the names and places. For instance, I am working on a series set in a Japanese inspired culture so names had to fit that culture, but I still needed to be cautious not to use words that could have bad or negative meanings, and to ensure they were appropriate (an early name I was going to use for a character turned out to mean “hot noodle soup” lol so I had to change that). In those situations, google is my BFF, and I have friends I can turn to who know the language and can give ideas/feedback.

I think I would pick Sawyer, from the Watcher Series, because she is strong and smart and can run lol, all things I am not! (minus the smart, but she’s more street smart). I would like to be in her shoes for a day to see what that sort of ‘power’ feels like. She is also one of my few characters who experiences first love at 18 (it’s a dystopian series, so relationships weren’t a priority), and I think it’d be fun to experience those first butterflies and excitement again! Plus…Kenzie is hot!

Hehe, as a fan of Watcher, I can 100% understand why you’d pick her. Thanks so much AJ for taking part, I’m VERY excited for your fantasy series to come out and I’m a huge fan of the Watcher series, which is available here on Amazon, and here’s the cover and blurb:

Sawyer’s life is simple, if not easy. Her home might be in ruins, but she can protect what’s left of it.

A city destroyed by the bots—that’s home. Humans have been hunted, but Sawyer is one of a few who have turned the tables. She’s a Watcher. Taking out the bots one by one. Protecting what’s left. It’s the carbons she needs to be wary of. Faster and stronger than humans, they’re dangerous. But Sawyer’s smarter. That will keep her alive.

At least, that’s what she believed. But the carbons are evolving, and their plans are ever more cunning. Suddenly her friends are dying. Safety can no longer be taken for granted—not even for the Watchers. At least she has Kenzie. Love is a strong word, but whatever they have, it’s what keeps her going.

Embarking on a desperate mission to save humanity from extinction, Sawyer discovers that the line between friend and foe is no longer easily drawn when one of her own betrays them.

And when a horrific plan comes to fruition, Sawyer will have a choice: who to save, and who to let go.

Find out more about AJ Eversley and her books here.