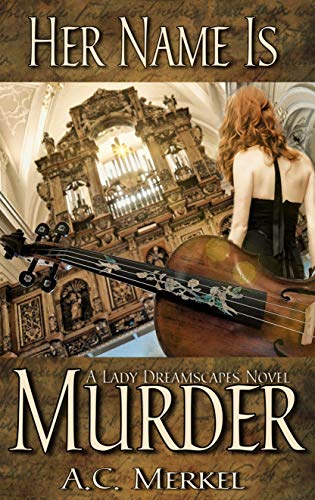 Hello I’m A.C. Merkel. Author and “retired”  musician. When I’m not repairing automobiles for a living I can be found infusing music and history into fantastic new magical worlds.

I am a founding member of Qi (queerindie.com) we have a growing directory of books that both feature queer characters and books by allies. Every book has a home.

Please give us a little introduction to your epic Lady Dreamscapes series.

We have existed in the shadows of your world for all of history.
The blessed, the cursed, the mages and the witches.
Sometimes you choose to ignore us.
Sometimes we cover it up.
We keep our heads down, lest you lot make them roll.

Murder is a princess, based on a very real historical scenario that I have twisted slightly. Okay maybe more than slightly.

Murder was a Halloween prompt word for VSS365 (very short story 365 days a year) on twitter… I composed a tweet.  The first one about the character. I immediately knew I was onto something bigger. So I kept it and wrote a joke VSS instead.

How can I tell you about it it without spoiling it? It’s Murder’s reaction to, well, a murder… was really hard to hurt her so thoroughly. I just about forced her into a catatonic state…

What’s your favourite piece of dialogue in your most recent book/short story?

Has to be in the catacombs outside of Rome. The bit where Murder catches herself “guest lecturing” I had to do a deep dive into the history of the locale for her monologue here and it’s historically correct and reveals something unique about her as a magical character. She has a cultural attachment that is at odds with her station in life. And she’s fully devoted to her belief. Yet still with a twist. It also contains her one and only F-bomb. (The only one in the book.) She’s way too refined for that to be a regular occurrence. It was fun to shock her companion with it.  Tress being a main character now in book 2, London Calling has forced me to be a little looser with the cuss words. She’s a metal head and a goth so… she likes to cuss. Lol.

I’d be Murder herself and would spend the day playing the violin since I can’t and she’s the absolute best, seeing how she has over 400 years experience. I would have to say that the violin and my love for it is near half the reason I wrote about an immortal in the first place.

What’s the strangest thing you’ve done or experienced to help create a scene?

I think driving down the road talking out dialogue to make sure it flowed. There was a lot of that during November last year.

How much world building takes place before you begin writing?

I had the basics of immortality decided and some rules about what would be possible. And what would and wouldn’t exist. I had decided for certain there would be no Vampires no Werewolves and no love triangle. The lead and her love interest were a Princess and a man named Noble for the fairy tale element with a twist.  Still the story I envisioned was way different and inferior to the story that happened.

Which three authors have most inspired your writing and why?

I think Murder comes from a place where movies and TV and books collided for me. There’s a definite mixing of The Vampire Lestat and Highlander. And a bit of influence from Netflix’s Sabrina. It’s also a classic Christian and Renaissance mythology which comes from the time Murder is from. That’s my love of the time period. The 16th century has so many amazing characters. I think the Lady Dreamscapes series is; Dan Brown with dialogue by Joss Whedon by way of subtle shades of Lev Grossman’s magicians which I haven’t read just watched on TV. As much as the book isn’t Scifi, I think there’s a strong Doctor Who vibe. But maybe that’s just me.

My all time favorite author has to be Michael Chrichton. His creations are still pop culture touchstones that have outlived him in massive ways. I hope to leave something like that behind. Something that still inspires people long after I am gone.

If you were trapped in a fantasy world from your childhood, which one would you choose and why?

I never got over Transformers. I really want a car that’s also my best friend. Lol.

If your book was made into a movie/TV show, who would star in it?

I want to mention this narrator I have working on the audiobook right now. I am in awe. She’s doing this amazing voice for Murder. It’s both sexy and vulnerable. She’s also an undeniable pro. I was floored by her audition and made the offer right away for fear of her getting grabbed by someone else. But she’s also doing all the accents for her… (there’s a handful) as well as voices for this fairly large cast. Her name is Jaimee Moore and she’s the first person to play Murder LaVoe. I’m super stoked.

As for someone to play her in live action. My friend and co-conspirator Anna Mocikat (author of Shadow City and Behind Blue Eyes) suggested Sofie Turner. I would certainly not turn her down. I’m kind of thinking Kat MacNamara looks more like how I see Murder looking. I’m not sure either of them have the chops to play this character. (Yes I think that highly of her…) I need a natural redhead, who can speak at least two languages, call up accents at will and has perfect pitch. She also has to be shockingly gorgeous, 25 and worth dying for. I’m not asking too much am I?

Definitely not asking for too much – we all want the best for our characters, don’t we?! Thanks so much A.C. for taking part in this interview – I’m a huge fan of Murder and her friends and felt myself rooting for them all from the start. The audiobook sounds like it’s going to be awesome!

Check out the cover and blurb for Her Name is Murder here:

Magical musician Murder LaVoe is tired of running. She’s been running for nearly 500 years. When you don’t age, people take it personally. She has returned 40 years later to her favorite borough in New York City, hoping to finally settle down and hide her secret by taking the identities of falsified heirs.

A public attempt on the life of her Rock-N-Roll alter ego, Lady Dreamscapes, and a chance meeting of subservient immortals in need, threaten to take away the life she holds so dear. Can NYPD detective Grant Noble III solve her mysteries in time to save her? Maybe it’s him that needs saving?

Levi Esmund is a Protector of the Ageless sculpted from Clay by Murder’s mother to be her companion. No one knows just how tied the fates of the Protectors are to their charges. Levi just wants a good book, and a hot guy. Maybe, just maybe, he’d like to be a real boy.

Tress is also a Protector. A Trans-woman, and white-out Victorian goth who has learned to excel at glamours and wards. The Curse Of the Ageless prevents her from physically becoming a woman permanently. She’s devoted her life to helping trans-girls in need. Just one problem. She has yet to figure out how to save herself.

For more about A.C. Merkel: